Soldiering on in January

January must be the most loathed month in my calendar, running closely with February, I just hate the cold, and boy has it been cold so far, we’ve had everything thrown at us apart from snow [thankfully]  but it’s coming to an end and I just have get through February and think Spring is on it’s way, though it won’t be rushed.

I’m glad to say that my thrushes are still foraging in the garden, the blackies seem to have accepted them. BUT… I have noticed a dearth of other birds with the exception of my robins, who are a permanent feature, I saw one Chaffinch where I used to have several, very few tits, and no goldcrests, I think there will probably be a wren or two but as they stick very close to the shrubs they are almost invisible. I’m wondering because it is so cold and I am constantly feeding the birds they are taking possession and scaring the little ones away, . I must mention though I can’t get rid of the pigeons and a couple of ravens who scoff as much seed in one gulp that would keep the little ones going all day. I do shoosh them off.

Here is a card I’ve made to while away the time between painting crits. Love making these , they are called pop up cards I apologise if I have put up the calendar card in a previous blog but they too are fun to make. that’s it for now folks. look forward to the dozens of comments. LOLOLOLOLxx 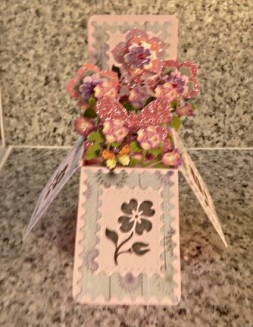