It’s not over yet. 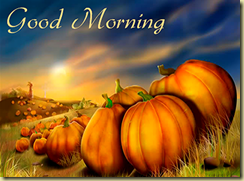 Summer is what I’m talking about, we appear to be having a little Indian summer, love it.

The past couple of days have been unseasonably warm and to-day also promises to be pleasantly warm and sunny.

I am so glad as there always seems to be soup  much to do in the garden at this time, Lots of pruning, never ending clearing of leaves, turfing out old, diseased or simply past their sell by date plants, Plantig bulbs is on to-day’s agenda.

I’ve been pruning back some Lleylandii that have gotten too big for their boots, Also managed to dig out an old oak root, though I think I mentioned that one. 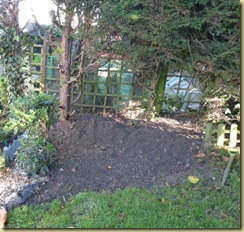 I have though dug out a Bridal cake Vibirnum, I did feel q bit of a pang, as it has been part of the spring season  every year for about twenty years, but I was noticing it was losing shape and the blooms were becoming more sparse,I felt it would have to go as part of the little make over.

There is also a little part of the garden up a slope which I did have access to in the past ! but the small shrubs I planted have grown too big to step over, so I have dug out one of them which will allow me to get to that part and give it some attention 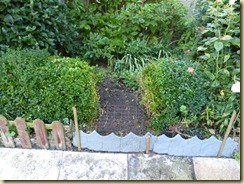 another before and after and again lots to do, so I’m thankful fro the nice weather, so off out with Ruby, on with the gardening clothes and get going.

One last little snippet The swallows and Martins are feeding frantically over the cliff tops, almost time to say good bye to them, now that does sadden me.