I made a banana loaf to-day, first time for a while, as the last time I made this particular one it fell in the middle what a disaster it was, the gulls enjoyed it though, it was the first time I’d baked in this oven so I have to get used to the temps. so I bought an oven thermometer to be on the safe side, Mine read a different setting, so I adjusted it. I had some ripe bananas hanging on the hangman’s noose so I was determined to have another go,

Huh, I must be losing my marbles , after I’d creamed the butter, or so I thought, I added the eggs, and realized the butter wasn’t creamed enough, it was still a bit solid here and there.  mistake no one,

I had to add mashed banana, and flour and sugar a bit at a time. Then when I was clearing up, I noticed there was some sugar left in a dish, oh no, the cake was in the oven so I just said a few choice swear words to make me feel better and let it cook. Here is a pic, I don’t know what it’s going to taste like, I also don’t know why the heck I baked it as I’m going out for a meal to-night and I’m on a ‘don’t open the food cupboard of fridge’ diet. will I ever learn, 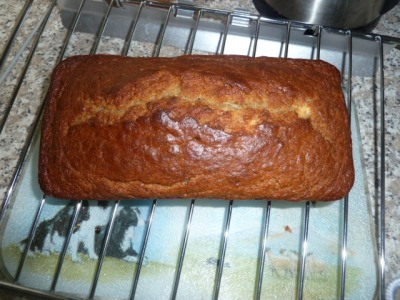 I’ve also got a loaf in the breadmaker, so please Lor’ I’m not having a completely bad cooking day. though it would help the diet should it be so.

I just  heard the bread beeper ping to take the bread out, I think it looks OK